Message from Gen-uemon Sudo,
the President of SUDOHONKE CO., LTD. 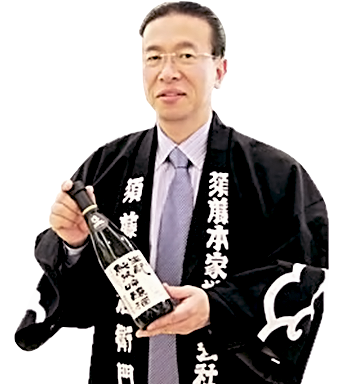 When we first brought unpersteurized sake and seasonal sake Hiyaoroshi to the market, it was the time when needs for quantity still won over the quality; types of rice to use and rising rice polishing rate were not the primary matter for other breweries to consider. Also we also started finding ways to pair sake and foods when there was no “mariage” for wines and foods in Japan in 1973.

That was the time when we built our foundation as an innovator. Since then, we have highly been recognized not only domestically, but also internationally including chefs, sommeliers, and even royal families; at the International Wine Challenge in 2007, we awarded gold, silver and commended, also trophy from Sam Harrop, the chairman of IWC. Plus 91 points was given from Robert Parker.

Today, the highest price we got at the market was $13000.00, the KAKUNKO vintage 1993. I believe this price was simply an honest and direct reputation toward the quality of our sake, and I feel honored.

At the Annual National Bureau's Research Institute of Brewing, we used to be known as a brewery that received awards every year. However, we awarded prizes with sake called Daiginjo sake, which contain distilled alcohol. Since we stopped brewing Daiginjo sake, prizes including gold are no longer given to our brewery.

I believe sake that was simply brewed with rice can be called real sake. In several countries, Daiginjo sake is classified as liquor, even in some countries, it is considered as spirits. However from historical perspective, the use of distilled alcohol is reasonable and understandable; during Edo era, a brewing technique manual called, Hashira Shochu, was built; a technique of adding distilled alcohol during the brewing process.

That manual was used to decrease the chance of failure during the fermentation. As another historical event that helped distilled alcohol to become one of the main brewing technique, distilled alcohol was used as a substitute of rice during shortage after the WWⅡ. These are not only reasons but these events are kay factors why we today see sake added distilled alcohol on shelfs at liquor stores. Even in such circumstances, we have been stubborn to add no distilled alcohol, and brew with very fine rice from locals and pure water.

We are confident enough to state here that there is nothing better than sake brewed with the rice from locals and very pure water from underground. Our ancestors have been brew sake with the rice from locals. Even in Edo era, there were ways to transport far distance, plus transporting rice should have been easier than transporting sake. Yet why our ancestors use rice from locals instead of using transportations they already had? The answer is simple. They knew the compatibility between rice and water. Rice, the plant, requires a right the environment to grow healthy.

For instance, the rice Yamadanishiki was cultivated in Ibaraki, component ratio within a rice would be different, and the total amount that can be harvested would be as half as Hyogo prefecture. Therefore, the sake brewed with the rice from Hyogo and the water from Ibaraki cannot avoid having some quality inferiors compared to the ones with ingredients from all locals. Due to this reason, we only use the rice from locals, and we have been successful to brew purely fine sake.

The more we brew, the more we realize how big power the mother nature has. We shall not forget the appreciation to the seasons and nature we are blessed to have. As one of responsibility as a head of family, I am responsible for maintaining the nature, and that’s what we have been doing over the generations.

In fact, our family motto is “Never cut the trees” that there are more than 500 years old trees surrounding the brewery. These trees have been playing big role not only for us, but also for all the human beings in the ecosystem: producing clean oxygen, shading the sunshine, and also it heals and refreshes our souls. The nature: the trees are necessary elements in our lives. As another role that trees do, trees collect pure water. When specialist of water well came to do a maintenance, they were amazed how clean the water in a water well was. I believe it is important to think and look ahead 100 years, and determine how and what to do to sustain permanent value in what we make for the next generations.

In Japanese traditions, each family used to share common value such as manner, ethics or traditions. Ikebana (Flower arrangement) is one of examples. Arts created from the traditions each family were beautifully unique, and that have shaped Japanese culture. Yet now this culture has been fading away little by little. Even though it is a good thing that today there are variety of products from all over the world, there is one thing that we shouldn’t lose: the true traditional common value in craftsmanship.

It's no exaggeration to say that the true value of craftsmanship roots from sake. Sake at first was brewed as a gift to gods; we brew, offer before gods, and then Afterwards, sake was served for people as naorai (feast after a ceremony). This is what true value rooted from.

Brewing sake is full of joy and excitement. Our mission is to share and spread this joy to more people while passing down our traditions to the next generations. We keep on challenging ourselves to brew sake better and better.

Hope our sake brings you a joy.